TLDR: A brief introduction to our NIPS 2017 paper, A-NICE-MC: Adversarial Training for MCMC, where we introduce a method to train flexible MCMC proposals (parameterized by neural networks) that are provably correct and much more efficient than typical hand-crafted ones.

Bayesian Inference is a key paradigm in AI and machine learning. The goal is to estimate a posterior distribution over models \(p(\theta \vert x)\), given a prior \(p(\theta)\) and a data likelihood \(p(x \vert \theta)\), through Bayes’ rule:

Unfortunately, the posterior is often intractable to compute, hence approximations are used in practice. There are two major paradigms for approximate inference: Variational Inference and Markov Chain Monte Carlo (MCMC) methods. In variational inference, the posterior is approximated with a simpler distribution: the problem is reduced to an optimization one, where the objective is to minimize some notion of distance between the posterior and a family of approximating distributions. In MCMC, the posterior is approximated with a set of particles, obtained by simulating a Markov chain. Variational inference methods are more efficient computationally but are limited by the expressiveness of the approximating family. MCMC methods, on the other hand, are generally slower but have the appealing property that they are asymptotically exact in the limit of infinite samples.

In recent years, there has been enormous progress in variational inference methods. One of the reasons is that because inference is reduced to an optimization problem, it can easily benefit from the use of expressive deep neural networks, automatic differentiation, and stochastic gradient descent. MCMC methods, on the other hand, have not benefited as much from these advances. MCMC methods typically use Markov Chains that are hand-designed, and generally do not involve a large number of tunable parameters; even if they do, MCMC performance metrics are difficult to quantify and thus optimize directly.

In this blog post we describe a new approach to automatically obtain more efficient MCMC proposals. Instead of using domain-agnostic and hand-crafted Markov Chains, we consider a flexible class of chains that are parametrized with neural networks and can be tuned to specific application domains. The network is trained through a novel adversarial training method which allows the discovery of efficient Markov Chains for posterior sampling. As we will demonstrate in the experiments, the learned chains allow us to generate posterior samples far more efficiently than state-of-the-art hand-crafted proposals such as Hamiltonian Monte Carlo (HMC).

Given a distribution with some (un-normalized) analytical form \(p(x) \propto \exp(-U(x))\), how can we sample from it efficiently?

Even with the analytical expression, direct sampling is difficult. The idea of MCMC methods is to instead set up a Markov Chain such that if we were to simulate this chain for a sufficiently large number of steps, the chain would ultimately converge (in distribution) to \(p(x)\) (its stationary distribution).

The Metropolis-Hastings (MH) algorithm, one of the most important algorithms of all time, provides a recipe to construct such a Markov chain given the un-normalized density. In MH, the user specifies an arbitrary proposal1 \(g(x' \vert x)\) that proposes a new sample \(x'\) given the previous sample \(x\). The algorithm then uses the following distribution to accept or reject the proposed sample:

and that the stationary distribution of the chain \(q(x' \vert x)\) is always \(p(x)\). In other words, regardless of how the proposal is chosen, asymptotically this Markov Chain will spend the right amount of time in each state \(x\), i.e., proportional to \(p(x)\).

Metropolis-Hastings is the crux of most Markov Chain Monte Carlo (MCMC) methods (Brooks et al. 2011), and is widely used in Bayesian statistics, computational physics, computational biology and graphics. However, Metropolis-Hastings does not tell us anything about the convergence rate to the stationary distribution, which in fact depends heavily on the proposal used for sampling. Therefore, the selection of a good proposal is a crucial problem in MCMC. Unfortunately, selection of a good proposal is particularly hard, because convergence to the stationary is difficult to detect, and it is therefore hard to tell which proposals are “good”. Popular metrics to evaluate MCMC performance include Effective Sample Size (ESS) and Gelman-Rubin diagnostic 2.

This leads to the following problem:

Is it possible to automatically choose a reasonably “good” proposal for a specific distribution \(p(x)\)?

In this post, we discuss an approach to achieve this. Our learned proposals are significantly more effective than hand-crafted proposals such as HMC, as shown in the following figure where we can quickly recover the target distribution \(p(x)\): 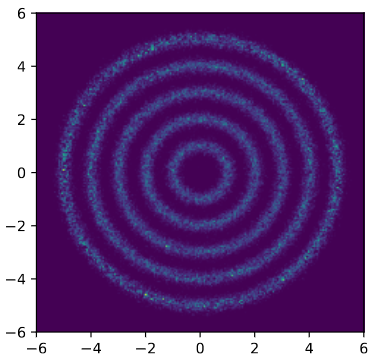 Suppose we have a flexible family of proposals parameterized by \(\theta\), e.g., with a neural network. For example, \(g(x' \vert x)\) could be a Gaussian with mean and standard deviation given by a feed-forward neural network taking \(x\) as input.

The challenge is that evaluating probabilities with respect to \(\pi_t\) – computing the probability of a state at time \(t\) – requires integration of all the possible paths of length \(t\) leading to that state. This rules out any kind of likelihood-based method. However, sampling from \(\pi_t\) is relatively straightforward.

In our case, the generator \(G\) can be defined from the transition operator \(T_\theta\) applied \(t\) times 4. If we could choose \(p_d=p\), we would enforce convergence of the resulting Markov Chain to the desired stationary distribution \(p\) in \(t\) steps. Unfortunately, optimizing the above objective requires samples from \(p_d=p\), which we don’t have. 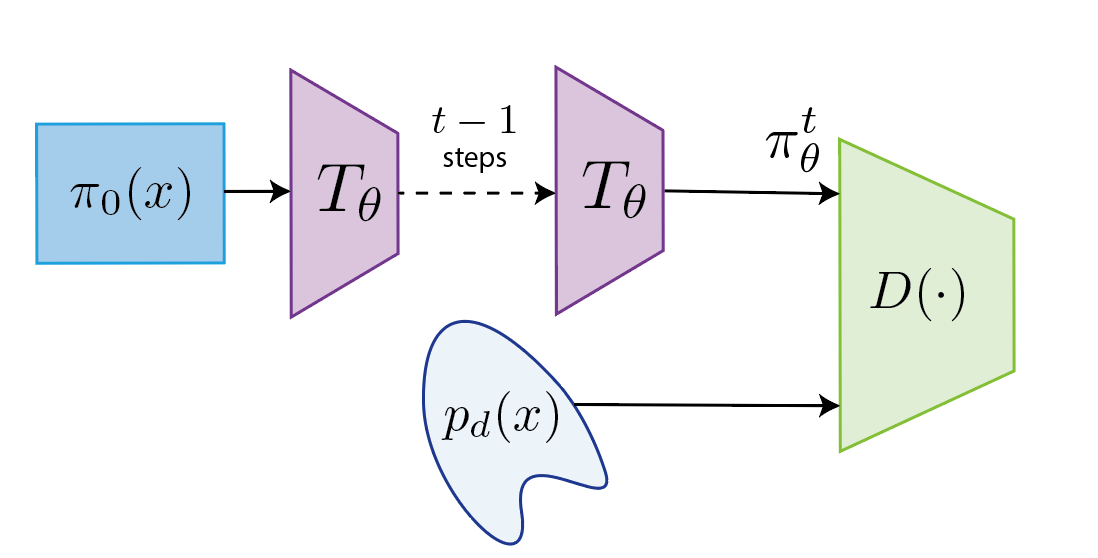 Ideally, we would like to optimize the above objective using a set of samples from \(p(x)\) – this is how these techniques are typically used; however, in our case we are provided with the analytical form of \(p\) instead of samples, and obtaining samples is the whole purpose of MCMC!

To overcome this challenge and obtain samples from \(p(x)\), we consider a bootstrap process:

In other words, this procedure allow us to obtain better samples and better proposals iteratively.

Metropolis-Hastings with A NICE Proposal

The only remaining step is to define a suitable class of proposals, which have the following requirements:

A seemingly natural choice is to set the proposal \(g(x' \vert x)\) to be a Gaussian with mean and standard deviation given by a feed-forward neural network taking \(x\) as input. With this proposal, we can obtain samples from the corresponding MCMC chain and optimize the adversarial loss with score-function gradient estimators (such as REINFORCE). However, we found this method fails completely due to extremely low acceptance rates at the beginning of the training process.

Therefore, the above approach would fail since \(g(x \vert x') / g(x' \vert x)\) tends to be too small, leading to low acceptance rates. As an alternative, we could use NICE where the value of \(g\) does not affect the acceptance rate.

We utilize a special type of neural network architecture called NICE (Dinh, Krueger, and Bengio 2014). The NICE network is invertible and volume-preserving (the determinant of the Jacobian is 1). This property is particularly useful for constructing parametrized neural network proposals that belong to the “implicit” category.

Let \(f(x, v)\) be the NICE network we wish to incoporate in our proposal, where \(v\) is an auxiliary variable we sample independently from \(x\) at every step. We consider the following proposal, which we term a “NICE proposal”:

which holds for any specific parametrization of the NICE network.

How do NICE proposals connect to learning MCMC proposals? Interestingly, we can train the NICE proposal with the forward mapping \(f\) only, for the target \(p(x, v) = p_d(x) p(v)\), so the training procedure reduces to the fully-differentiable one. The following figure intuitively demonstrates why we could do this.

We can obtain a good MCMC proposal by training the forward process only.

This provides an automated process of training a domain-specific MCMC kernel that converges to the stationary quickly 5. We name the resulting process A-NICE-MC (Adversarial NICE Monte Carlo).

In the first case, we consider simple 2-D distributions that are easy to visualize. If there are multiple modes that are far from each other, HMC can fail to move between the modes efficiently, and in some cases it does not converge to the target distribution even with multiple chains. A-NICE-MC, on the other hand, is able to move across these modes easily with neural network proposals.

Sampling from distributions with multiple modes with A-NICE-MC (in gif).

In the second case, we consider posterior inference for Bayesian Logistic regression, which has a single mode and for which HMC is a strong baseline. While HMC outperforms A-NICE-MC in terms of ESS, the fact that it computes gradient information makes it slower to compute, and that A-NICE-MC actually outperforms HMC in terms of ESS per second since it does not compute \(\nabla U(x)\). Moreover, we tune the parameters for HMC in different dataset while using the same set of parameters for A-NICE-MC.

ESS and ESS per second for Bayesian logistic regression tasks.

In this blog post, we introduced the first likelihood-free method for training the transition operator of a Markov Chain, and ways to bridge the gap between MCMC and deep learning.

The code for reproducing our experiments is available at https://github.com/ermongroup/a-nice-mc.