Probabilistic models are important for inference and prediction in many areas of machine learning. In this post, we focus our discussion on parametric probabilistic models, e.g., models that can be determined by specifying its parameters. Such a model may have several different parameterizations. For illustrative purposes, let’s consider a simple linear regression model that captures the joint distribution of input \(x\) and label \(y\):

where \(\theta\) is the parameter, and \(b, \sigma\) are two fixed constants. By substituing \(\theta\) with \(2\mu\), a different parameterization can be created

Given a loss function \(L(p(x, y))\), the goal of an optimization algorithm is to find the model \(p^\ast(x, y)\) such that \(L(p^\ast(x, y))\) is as small as possible, in the form of finding the optimal parameter \(\theta^\ast\) or \(\mu^\ast\) under some parameterization. Although re-parameterization does not change the model family, the performance of optimization algorithms usually differs under different parameterizations. In the following section, we use the linear regression model as a running example to elaborate on why this can happen.

Why optimization can depend on parameterization

Returning to the example of linear regression, a typical loss function is the expected negative log-likelihood, which can be formally written as

Luckily, this dependence on model parameterization is not universally true for every optimization method. For example, the Newton-Raphson method is invariant to affine transformations of model parameters. Therefore, for the linear regression case discussed above, the Newton-Raphson method will ensure that \(p_{\theta_{t+1}}(x,y) \equiv p_{\mu_{t+1}}(x,y)\) as long as \(p_{\theta_t}(x,y) \equiv p_{\mu_t}(x,y)\), because the new parameter \(\mu = \frac{1}{2}\theta\) is an affine transformation of \(\theta\).

Following this thread, we next discuss the Natural Gradient Method (Amari 1998)—an optimization method that uses a similar preconditioning matrix to that of the Newton-Raphson method, but is said to be invariant to arbitrary differentiable transformations of model parameters when the learning rate is small enough.

From the example of applying gradient descent to linear regression, we can easily see that switching between model parameterizations can cause the gradients and parameters to change in different ways. So how can we ensure that when the parameterization changes, the gradient will also change in a clever way to compensate for its effect on these optimization algorithms?

In 1998, inspired by research on information geometry, Shun’ichi Amari proposed to use natural gradient (Amari 1998) to solve this problem. A full understanding of natural gradient requires some basic concepts from Riemannian geometry. Although it is not required for understanding the rest of the post, we encourage interested readers to review the following introduction to Riemannian geometry.

Mathematically, suppose the loss function is \(L(p_\theta(x,y))\), we can write the natural gradient as

and we use a tilde mark (~) to differentiate the notation of natural gradient from that of ordinary gradient.

As a sanity check, let’s see how natural gradient eliminates the non-invariance of gradient descent for our linear regression example. For different parameterizations of Gaussian conditional distributions, the derivatives of the log densities are respectively

which indicates invariance of the optimization step:

More generally, consider an ordinary differential equation (ODE) that describes how the parameter \(\theta\) should change as a function of \(t\), following the natural gradient smoothly:

Here \(\lambda\) is just a prespecified scaling constant. If we change the parameterization from \(\theta\) to \(\mu\), we get a similar ODE:

The following observation on invariance can be derived with knowledge of information theory and Riemannian geometry:

However, it is usually intractable to solve such a complicated ODE for practical optimization tasks, and various approximation schemes must be used. From the perspective of numerical methods for ODEs, the naive natural gradient descent method

can be viewed as approximately solving the ODE

using the forward Euler method with a step size of \(h\). Such an approximation with discrete step size will potentially cause loss of invariance. 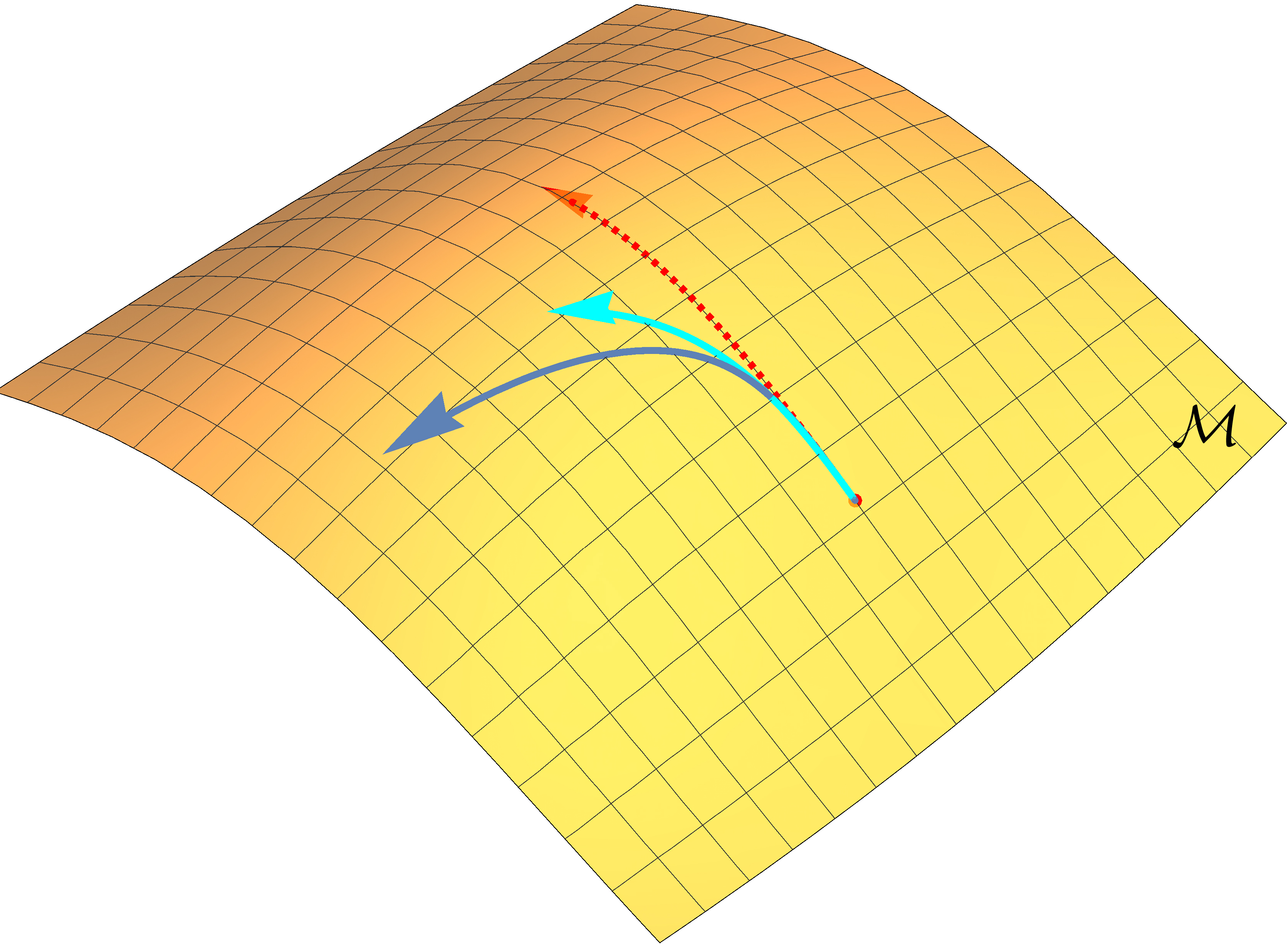 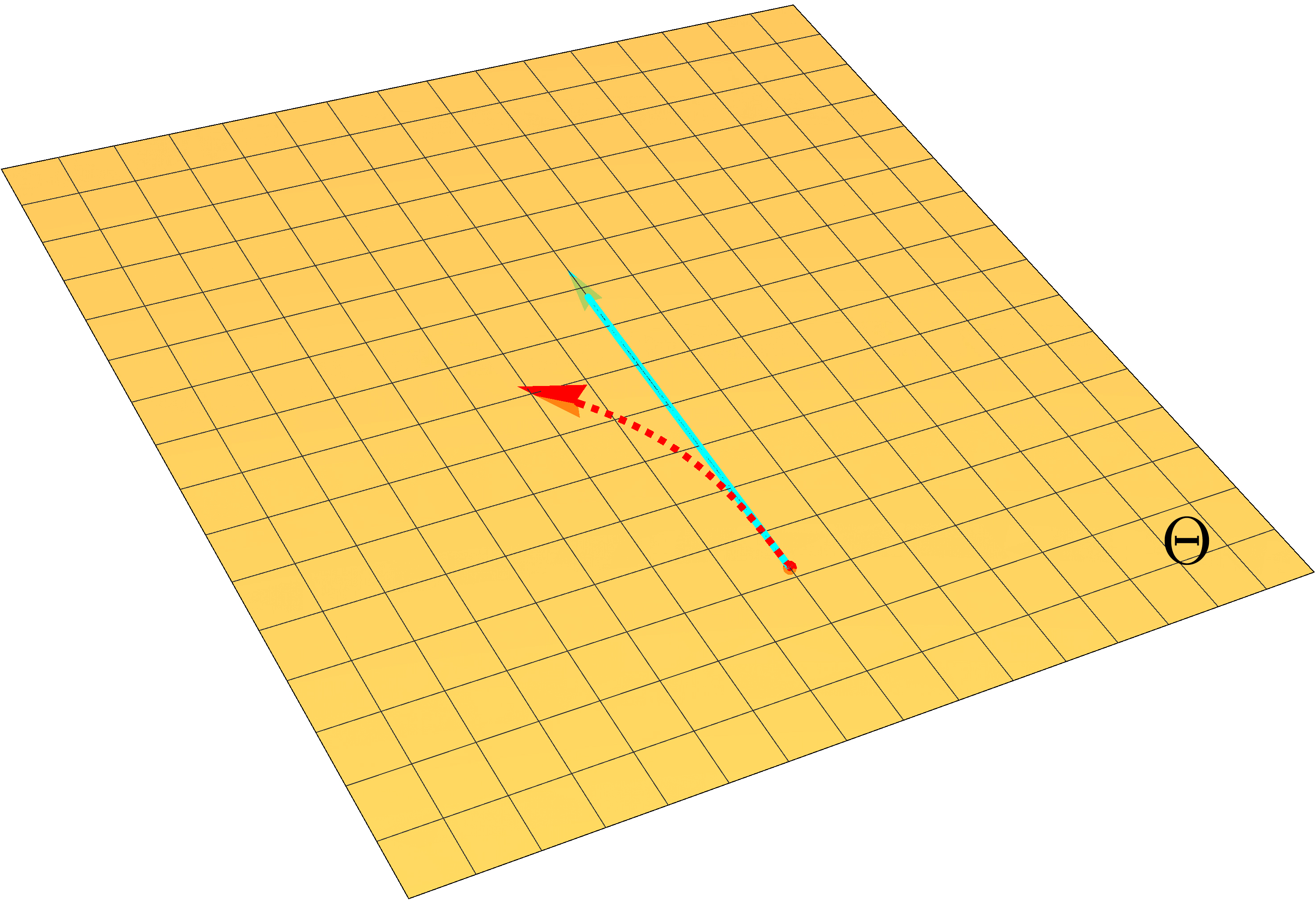 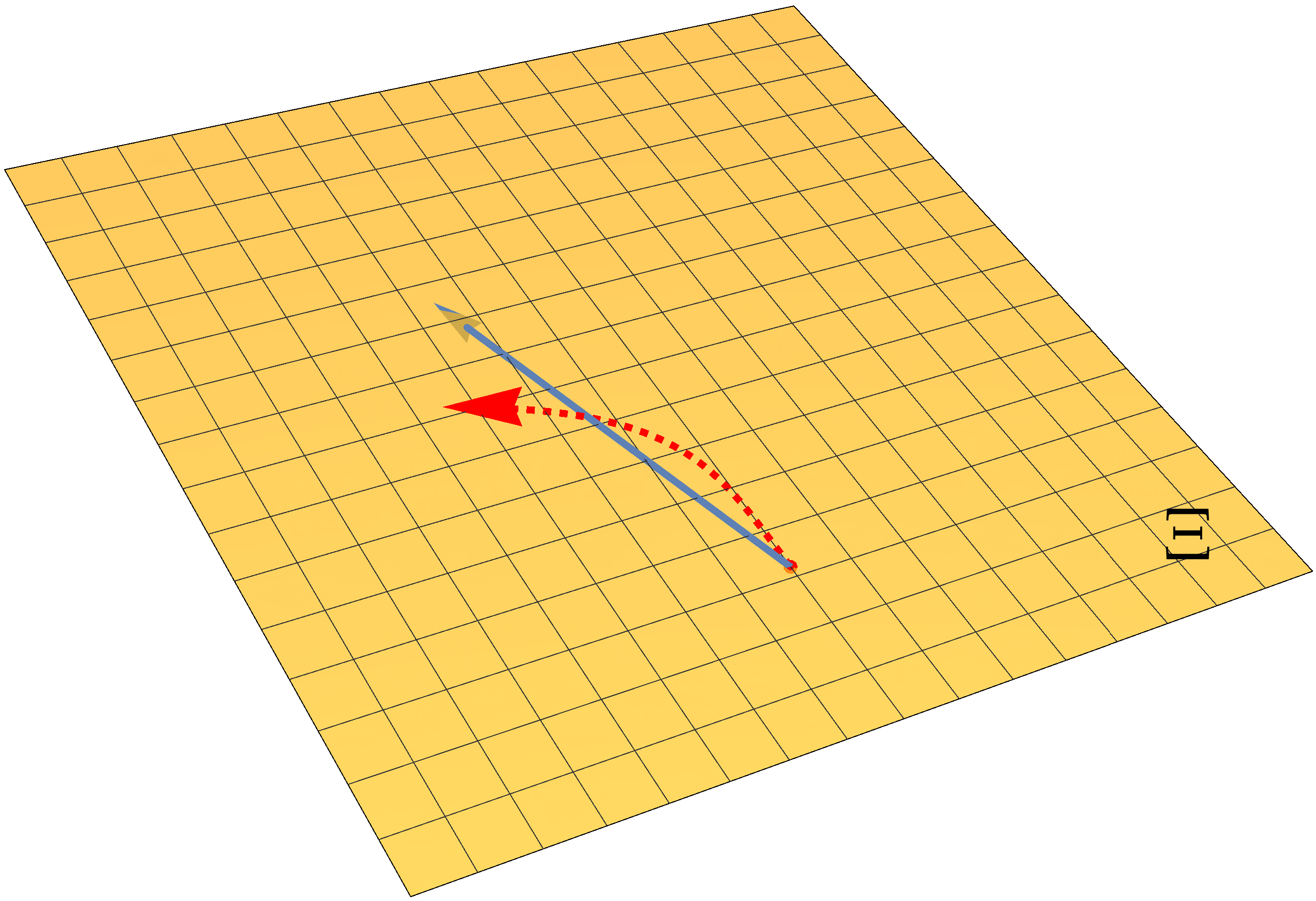 Because the natural gradient ODE solution is invariant, a straightforward approach to improving the invariance of the optimization is to exploit more accurate solvers. In numerical analysis, the accuracy of a solver is measured by computing its convergence order to the exact solution when step size \(h \rightarrow 0\). We say that a numerical ODE solver is \(d\)-th order accurate if the error between exact and approximate solutions decreases as \(O(h^d)\). The forward Euler solver used in the traditional natural gradient update is a simple first-order solver.

We discuss two approaches to improve the invariance of the natural gradient update:

Natural gradient ODE has an invariant solution; we just need to improve the accuracy of our numerical ODE solver such that the optimization trajectory is closer to the invariant one. In the paper, we discussed using a second-order solver called the Midpoint Method as a replacement for the first-order forward Euler method.

The Midpoint method can be decomposed into three steps to approximately solve the natural gradient ODE:

Some solvers can be more invariant by making their update rules more agonistic to reparameterizations, even though they are not necessarily more accurate than the forward Euler method. In the paper, we investigated a first-order solver called the Riemannian Euler Method (Bielecki 2002) which is exactly invariant to reparameterizations when approximately solving the natural gradient ODE. In other words, when starting from the same initial probabilistic model, the Riemannian Euler method will return the same final probabilistic model after a fixed number of iterations, as long as the learning rate is fixed.

The good news is that this exponential map can be easier to approximate than the invariant solution of the natural gradient ODE. Leveraging the geodesic equation—an ODE governing geodesic lines on a manifold—we can obtain a second-order approximation to the exponential map. Equipped with this approximation, the update rule now becomes

An interesting observation is that if we use the naive natural gradient update rule, it amounts to using the Riemannian Euler method with first-order approximation to \(\operatorname{Exp}(\cdot, \cdot)\). This observation confirms that geodesic correction can provide more invariance (asymptotically).

Finally, we apply our techniques to improve the invariance of the natural gradient update and observe how they affect optimization performance. We first examine a toy problem to demonstrate that our methods achieve better invariance, then show that they lead to improved optimization for several tasks in various areas of machine learning, including supervised/unsupervised learning and reinforcement learning.

Testing invariance on a toy problem

where \(\Gamma(\cdot)\) denotes the Gamma function.

Next, we test all the natural gradient updates to see how well they can fit the parameters of a univariate Gamma distribution under different parameterizations. In the following figure, we show how the negative log-likelihood (our training loss) decreases with respect to training iterations. We use ng to denote the naive natural gradient update, mid for midpoint integrator, geo for geodesic correction, geof for the faster version of geodesic correction, ng(exact) for solving the natural gradient ODE exactly, and geo(exact) for using the exact Riemannian Euler method (without approximating the exponential map).

We then show the results of training deep autoencoders and classifiers on the MNIST dataset2. The following figure illustrates how the different optimization algorithms fare against each other. The bottom x-axis corresponds to the number of iterations during training, while the top x-axis corresponds to the wall-clock time. The y-axis shows the training error. Each optimization algorithm has two curves with the same color: one is solid while the other is dashed. We can observe that improved natural gradient updates converge faster in terms of number of iterations, and the faster geodesic correction also achieves lower loss in shorter wall-clock time, compared to the naive update.

** the wording of this paragraph is unclear; what do the two curves mean here? solid == improved updates and dashed == geodesic correction? ** 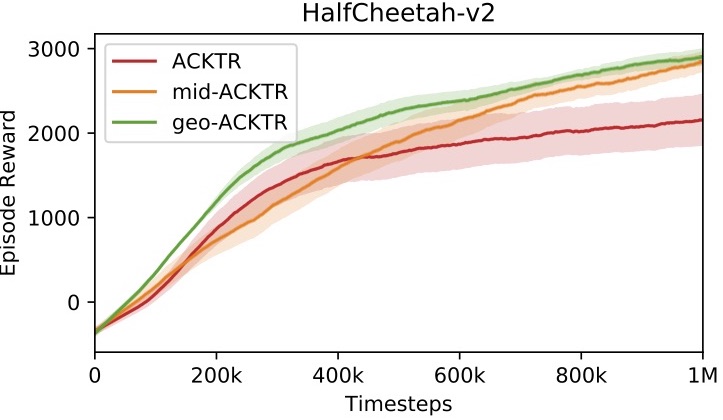