TL;DR: Here is an overview of our NeurIPS 2020 paper, “Probabilistic Circuits for Variational Inference in Discrete Graphical Models”. We consider the problem of variational inference in high-dimensional discrete settings, which is challenging for stochastic/sampling-based optimization methods. Instead, we would like to optimize using analytic (exact) gradients, but this has typically been limited to simple mean-field variational families. In this work, we extend this direction of analytic optimization by proposing an expressive variational family based on tools from probabilistic circuits (i.e. arithmetic circuits, Sum Product Networks). Our method’s combination of expressivity and tractability of computing exact gradients is suitable for inference in high-dimensional discrete settings. 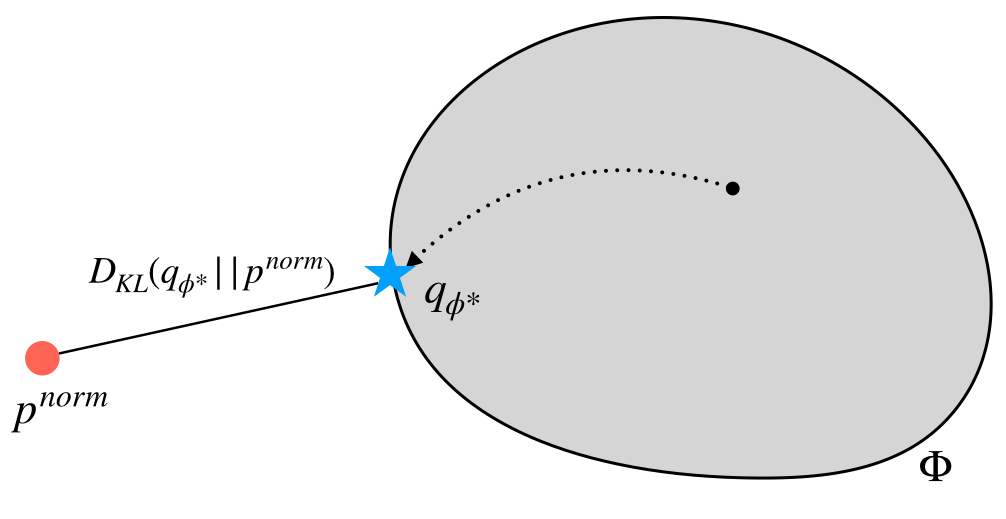 Unfortunately, the problem of finding the optimal \(\phi\) is rather difficult in high-dimensional discrete settings (Zhang et al. 2018), which are relevant in many applications (e.g. in tasks such as topic modelling or image segmentation). Let’s see what makes them challenging, and how we can better optimize in discrete settings.

Finding these points of high probability can be challenging, especially in high dimensions where stochastic/sampling approaches are ineffective (curse of dimensionality), and especially in discrete settings. In discrete settings, we cannot take gradients with respect to samples to get information on where the high probability points are (i.e. the so-called reparameterization trick in continuous settings).

We’ll refer to the sampling-based approach as stochastic optimization.

Unfortunately, the estimates can vary wildly depending on the samples that we get (high variance), especially when \(x\) is high-dimensional.

In essence, stochastic optimization in high-dimensional discrete settings is like throwing darts blindfolded, with your friend telling you only if you hit the bullseye, but not which direction to adjust your throws. Except instead of a circular dartboard, you’re throwing helplessly into an N-dimensional lattice.

If Not Sampling, Then What?

Instead of relying on just a few samples to estimate the ELBO gradient, what if we directly compute the ELBO gradient? This would be equivalent to considering all samples at once! We would see exactly where the points of high probability are, and know exactly how to nudge \(\phi\) to distribute probability mass onto those points. We’ll refer to this direct computation approach as analytic optimization.

When using analytic optimization, we compute the ELBO gradient \(\nabla_\phi \mathbb{E}_{x\sim q_\phi} [ \log p(x) - \log q_\phi(x)]\) directly, without sampling. This gives us exact (zero variance) values of the ELBO gradient, and is equivalent to taking samples everywhere at once! We can then optimize \(\phi\) more easily to get tighter ELBOs.

Unfortunately, analytic computation of the ELBO gradient is rather difficult, and has typically been limited to simple mean-field variational families. In order to compute the expectation without actually taking samples everywhere (which would not be practical in high dimensions), we would need certain “structure” on \(q_\phi\) and \(p\).

Using a simple family (in blue) makes it easy to optimize, but the optimal solution is not great (far away from \(p^{norm}\)). Using an expressive family (in green) allows us to be close to \(p^{norm}\), but optimization is very difficult/noisy, as shown by the dotted path.

This tradeoff is quite inconvenient. We would like to get the best of both worlds – that is, to have an expressive variational family that allows for analytic/easy optimization of \(\phi\).

Best of Both Worlds

To get a more flexible variational family that still allows for analytic optimization, we look towards tractable probabilistic models that go under the name of Arithmetic Circuits, Sum-Product Networks, and Probabilistic Circuits.

Probabilistic Circuits (PCs) is an umbrella term for Arithmetic Circuits (ACs) and Sum-Product Networks (SPNs). These models induce a probability distribution using a circuit with sum and product nodes. Edges in the circuit are parameterized by weights \(\phi\). These models are tractable in the sense that we can compute exact likelihoods and marginals (such as \(p(x_1 \vert x_0)\)) of their probability distributions. For details on how to do this, here is a good resource (Choi, Vergari, and Van den Broeck 2020). Turns out, not only can we compute likelihoods and marginals tractably with these models, but we can also compute certain ELBO gradients analytically when using these models as the variational distribution! 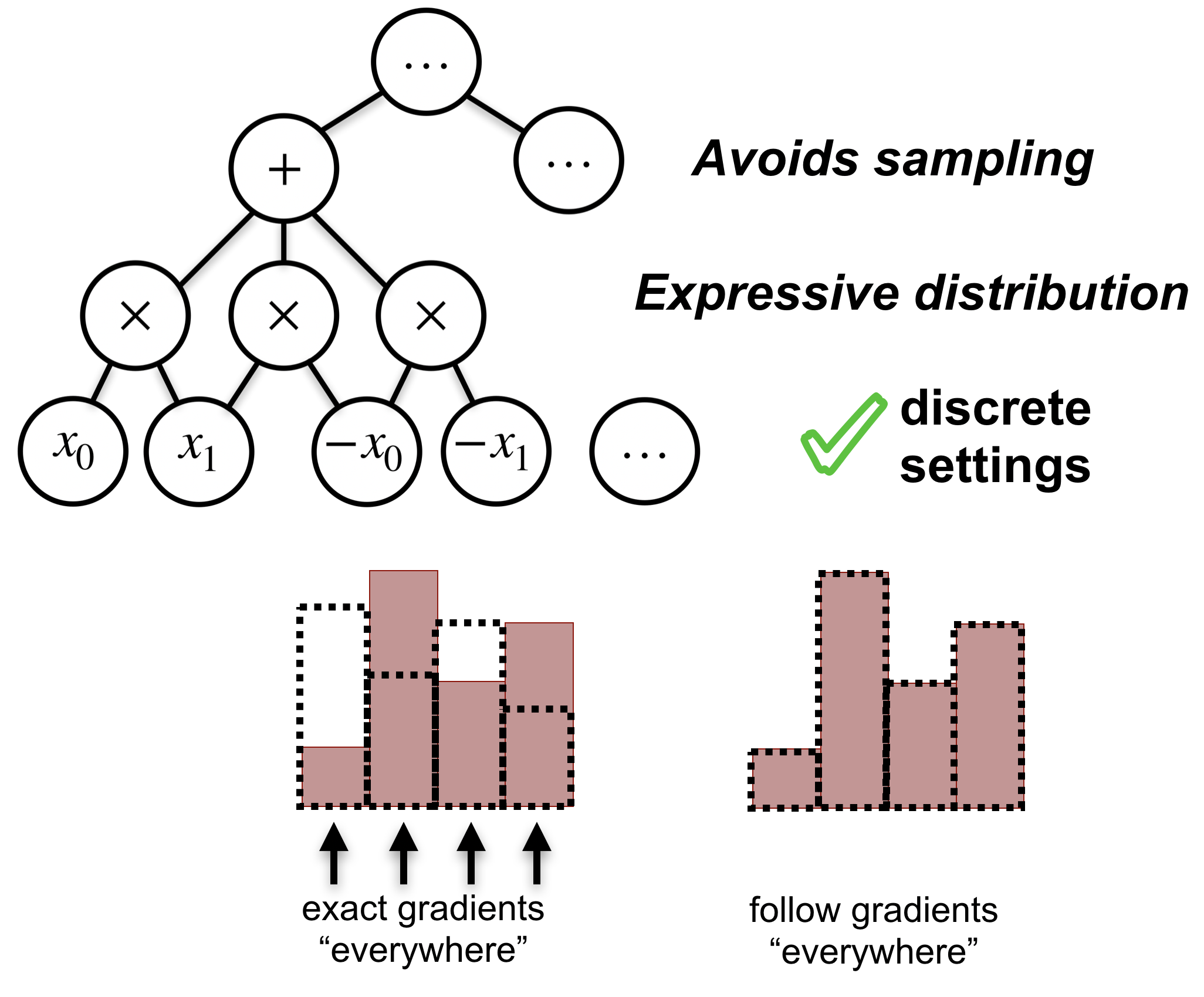 By computing the ELBO gradients analytically (no variance!), we are essentially able to follow the gradients ‘everywhere’ at once, even in high-dimensional discrete settings.

We showed that we can compute the ELBO analytically when using selective-SPNs as the variational distribution \(q_\phi\). Then, we simply use automatic differentiation to get the exact gradients of the ELBO with respect to the parameters \(\phi\) of the SPN, and gradient ascent to optimize the SPN. Some analysis will show that each optimization step takes time \(O(tm)\) where \(t\) is the number of factors when expressing the target distribution \(p\) in log-linear form, and \(m\) is the size of our variational distribution \(q\) (# of edges in the SPN). With GPU-optimization, we were able to scale to target models with more than 1,000 factors/variables and SPNs with more than 100,000 edges.

Using SPNs, we computed better estimates of the partition function compared to standard methods such as mean-field variational inference (MF-VI) or Loopy Belief Propagation. Compared to MF-VI, we were able to get ELBOs that are 4 times tighter on 16x16 Ising models. We also experimented on factor graphs used for topic modelling and image segmentation, where our method gave the best ELBO on 22 out of 23 factor graphs. 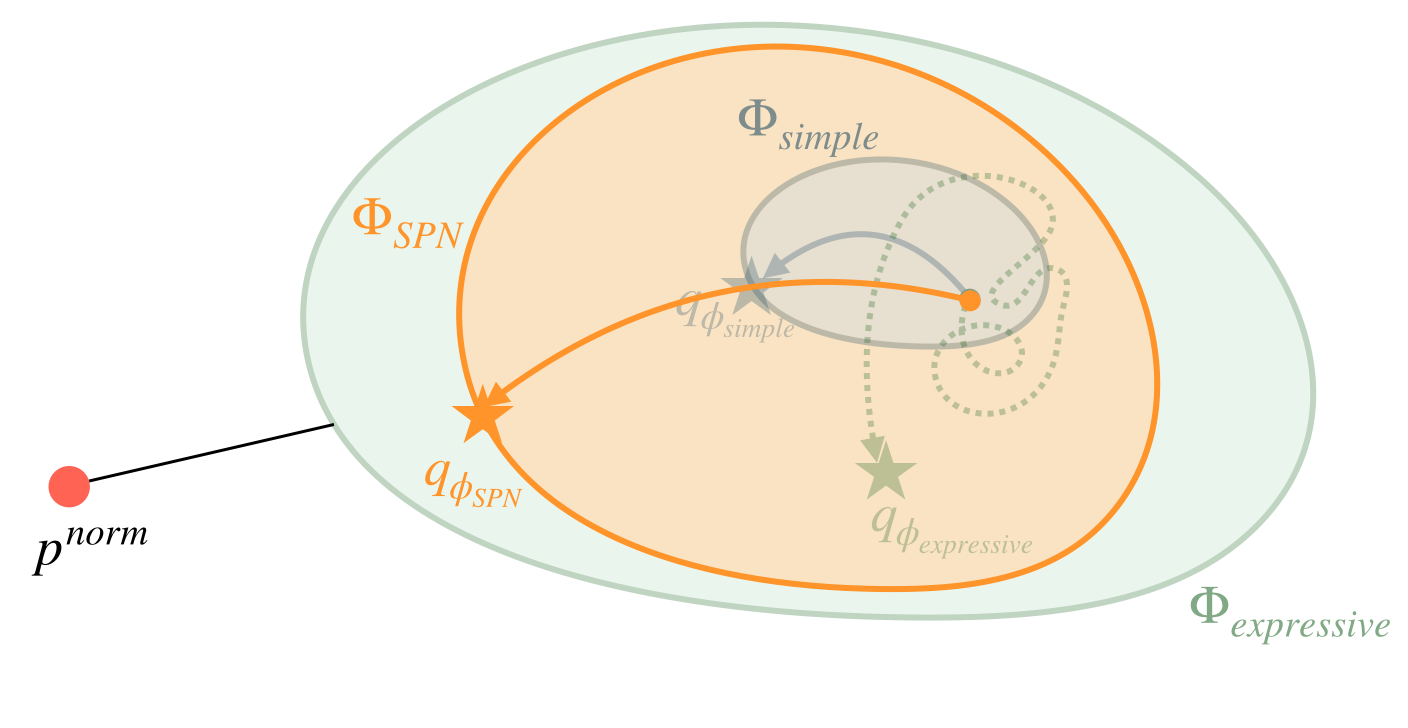 Using SPNs (in orange), we get more expressive power while still allowing easy/analytic optimization. The combination of expressivity and tractability gives us better ELBOs, and make SPNs suitable as the variational family for high-dimensional discrete settings.

Variational inference in high-dimensional discrete settings is challenging since sampling for the ELBO gradient works poorly and directly computing the ELBO gradient is difficult. To address this problem we proposed to use SPNs as the variational family – the combination of expressivity and the support of analytic optimization makes them suitable for high-dimensional discrete settings. To use these tractable probabilistic models in your own project, feel free to check out our code in Python, or check out this package in Julia from folks at UCLA.