TL;DR: Variational learning of intractable posteriors is computationally efficient, but the resulting approximations can be poor. We propose a general approach to increase the flexibility of any variational family by augmenting a parameterized variational posterior with a differentiable and tunable accept-reject step. The rejection rate for the resulting resampled posterior can be adaptively controlled to monotonically trade-off computation for statistical accuracy, with the resampled posterior matching the true posterior in the limit.

The key computational challenge in high-dimensional Bayesian statistics is to approximate intractable posterior densities. Consider the standard Bayesian inference setting where we have a set of latent variables that explain the observed data . We can perform posterior inference for such a model by following a simple recipe. First, we specify some apriori beliefs about through a prior density . Next, we observe a data point which relates to the latent variables through the likelihood . Finally, we can update our apriori beliefs regarding through the posterior density . Using Bayes Rule, we have:

Suppose we observe a finite dataset of samples sampled from an unknown data distribution and our goal is to approximate the data distribution as closely as possible. A standard approach is to learn a parameterized latent variable generative model that maximizes the marginal log-likelihood averaged over the entire dataset. That is, we consider the following optimization problem:

Evaluating and optimizing the marginal log-likelihood for any arbitrary data point is computationally intractable. We can sidestep this difficulty by introducing an amortized variational posterior with parameters .

The evidence lower bound (ELBO) objective above is tight when the variational posterior matches the true posterior, i.e., . 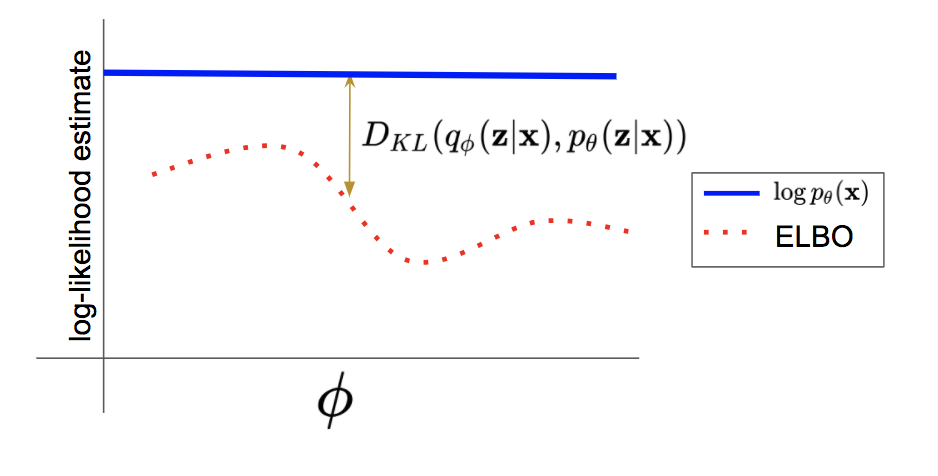 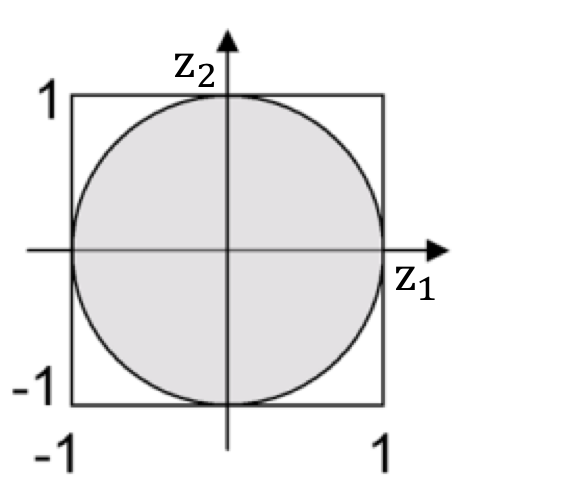 Let us assume we want to sample a point uniformly from the unit circle shown above. In order to do so, we first characterize an easy-to-sample envelope density that completely covers the desired circle, such as the square with side length centered at the origin. Sampling from a uniform distribution over the square is easy; we can independently sample the and coordinates between and . If the sample generated falls within the circle, then we accept the sample. Else, we reject it (we discard it) and repeat the process until a sample is accepted. It is easy to see this procedure is correct.

More generally in order to draw samples from a target density , a rejection sampler first draws samples from an easy-to-sample source density with a larger-or-equal support, i.e., wherever . Then, provided we have a fixed, finite upper bound on the likelihood ratio that holds for all , we can obtain samples from the target by accepting samples from with a probability . Note that the acceptance probability is guaranteed to be less than or equal to since defines an upper bound. The overall probability of any accepted sample is proportional to .

For rejection sampling to work in practice, we need two desiderata. First, the source density should be close to the the target density. Second, the constant has to be large enough such that it is a valid upper bound for the likelihood ratio and the acceptance probability does not exceed . In principle, any upper bound on the likelihood ratio that holds for all suffices to ensure the correctness for rejection sampling. However, even for a fixed source and target density, the optimal value is the one that attains the tightest upper bound. If we let , then the sampling procedure is still valid but becomes computationally inefficient due to a higher rejection rate.

For instance, consider the case where the target density is discrete and non-zero for only four states as shown below. 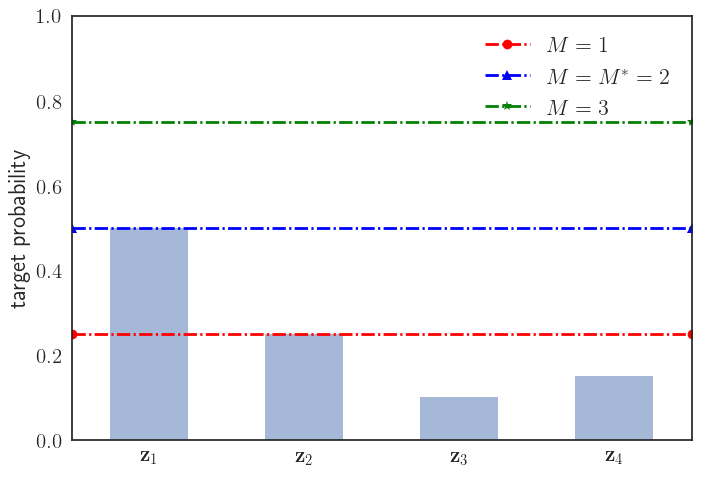 Depending on the choice of , there are three possible scenarios:

Hence, the choice of has a significant impact on the correctness and computational efficiency of rejection sampling. Finally, note that if the source matches the target then the tightest upper bound is trivially given by .

Both variational inference and rejection sampling (along with other Monte Carlo methods) are widely used techniques in machine learning for approximate inference. While variational inference is efficient and is able to directly leverage advancements in optimization, the model performance depends critically on the quality of variational approximation. Particularly when the data is high-dimensional, it is unlikely that relatively simple approximations such as mean-field, inspite of expressive parameterization based on neural networks, can capture the full complexity of the true posterior distribution. Rejection sampling on the other hand is exact, but a poor choice of the source distribution and/or the upper bound on the likelihood ratio can lead to a high rejection rate, i.e., a very computationally inefficient procedure.

We now discuss the variational rejection sampling (VRS) framework with a goal of attaining the best of both worlds. In particular, it seeks to improve the statistical accuracy of variational approximations in latent variable generative models using rejection sampling while still controlling for computational efficiency.

In VRS, we consider an implicit variational posterior defined through the following two-step variational rejection sampler:

where is an acceptance probability function that depends on , and an additional threshold parameter . Note that is not a density over , but denotes the parameter for a Bernoulli random variable that signifies the probability with which should be accepted.

The implicit variational posterior is referred to henceforth as a resampled posterior distribution and its density can be formally expressed as:

The resampled posterior represents a distribution over all the possible outputs (i.e. accepted samples) of the rejection sampler defined previously. The normalization constant for the resampled posterior, gives the average probability of acceptance for any sample from and governs the average runtime for obtaining a single sample from . This constant is generally computationally intractable as it involves an expectation with respect to a high-dimensional distribution, but is however unnecessary for defining the variational rejection sampler.

Further, we can state the ELBO for the VRS learning objective, which simply substitutes the variational posterior with the resampled posterior:

We now discuss the specification of the acceptance probability function and gradient estimators for efficient optimization of the above objective.

Recall that in vanilla rejection sampling, the acceptance probability for any sample can be specified under the following two assumptions:

For learning a latent variable generative model through ELBO maximization, the source corresponds to the variational posterior and the target is given by the true posterior . Assuming the supports of the source and target match, this gives us the following acceptance probability function:

where is an upper bound on the likelihood ratio . However, the true posterior is only known up to a normalization constant via . We can use then rewrite the acceptance probability function:

for some quantity that is a constant for a fixed and . Consequently, is required to be an upper bound for the ratio .

for some user-specified threshold . Finally, we relax the operator to consider a differentiable approximation and let to obtain the following acceptance probability function (derivation in the paper):

where . Hence, the negative log-acceptance probability is a softplus over . 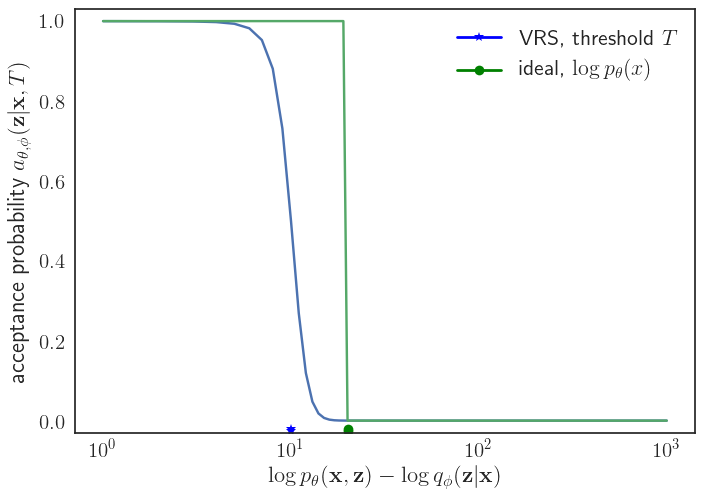 The choice of acceptance probability function above enforces the following behavior for the samples generated by the resampled posterior: samples from the approximate posterior that disagree with the target posterior (as measured by the difference in log-likelihoods ) beyond a level implied by the corresponding threshold have an exponentially decaying probability of getting accepted, while leaving the remaining samples with negligible interference from resampling.

For fixed , the KL divergence between the approximate and true posteriors, is monotonically increasing in .

Hence, the threshold acts as a knob for the resampled posterior distribution to trade-off computation for statistical accuracy, alternating between the following extremes:

We illustrate this phenomena on an example 2D discrete target distribution on a grid, with a uniform variational posterior approximation augmented with threshold-based resampling.

The resampled posterior (b-e) gets closer (in terms of KL divergence) to a target 2D discrete distribution (a) as we decrease the parameter , which controls the acceptance probability .

With no resampling (), the approximation is far from the target. As is reduced, we observe a progressive improvement in the posterior quality both visually as well as via an estimate of the divergence from approximation to the target along with an increasing computation cost reflected in the lower acceptance probabilities.

Unlike the standard variational posterior , the resampled posterior is not accessible as a normalized distribution. In fact, the normalization constant (or the partition function) is typically computationally intractable which makes the evaluation of the ELBO objective in the VRS framework challenging. Surprisingly, one of the attractive properties of the VRS framework is that we can sidestep the evaluation of the normalization constant for gradient-based optimization. We skip the derived expressions of the gradients here for brevity; the interested reader can refer to Theorem 2 in the paper.

Crucially, the expressions only involve sampling from the resampled posterior, which as illustrated previously can be done efficiently. In fact, we derive a more general version of the above result that provides an efficient gradient estimator for optimization of ELBO objectives for any unnormalized proposal distribution that can be sampled efficiently, even though evaluation may be computationally intractable due to the partition function.

Overview of algorithmic design and experiments

Training a latent variable generative model using the VRS framework developed is straightforward using stochastic optimization techniques: for every mini-batch of points, we evaluate Monte Carlo gradients for the ELBO objective corresponding to the resampled posterior. The key design question is how do we set the thresholds ? Ideally, should be set in a data-dependent way since the quality of the non-resampled posterior can vary signifcantly across different . In such a scenario, learning in a parametric way is one possibility and interesting direction for future work.

For the current work however, we specify thresholds in a simple quantile-based approach that accepts roughly the top -quantile of samples for the random variables . Since the distribution of the random variables changes during the course of learning, the thresholds are also periodically updated after several epochs of training. Hence, the user needs to specify only a single hyperparameter, , for specifying the permissible computation. The full algorithm is given in the paper.

We use this algorithm to perform density estimation on the binarized MNIST dataset using sigmoid belief networks with discrete latent variables. These models are particularly hard to optimize since the reparameterization trick is not applicable, leading to gradient estimates with high variance. We show the summary results with VRS models trained compared against the closest baselines on benchmark architectures:

Notably, we find empirically the effective number of samples from the posterior for VRS with is computationally comparable to which is much lesser than the best performing VIMCO model () illustrating the computational efficiency of our approach.

The variational rejection sampling is another step in a growing body of work for improving variational posteriors parameterized by deep neural networks with Monte Carlo methods. The specific choice of Monte Carlo technique for such hybrid methods can have a significant effect on the learning: prior work has explored MCMC (Salimans, Kingma, and Welling 2015), importance sampling (Burda, Grosse, and Salakhutdinov 2015), (Mnih and Rezende 2016), and sequential Monte Carlo (Naesseth et al. 2017), (Maddison et al. 2017), (Le et al. 2017). Our work proposes a framework inspired by rejection sampling. While rejection sampling is hardly an attractive Monte Carlo technique in itself, our theoretical and empirical analysis suggests that it can indeed have advantages over other hybrid methods for variational inference and learning.

It is worth noting that many of these Monte Carlo techniques are complimentary and could benefit from each other; for instance, an importance-weighted extension of VRS would assign importance weights to multiple samples drawn from the resampled posterior. Finally, we believe our gradient estimators could be exploited more broadly for stochastic optimization involving Monte-Carlo expectations with respect to other unnormalized distributions, such as energy-based models. If you are interested in reading more about this research, check out the paper below: