The learning approaches we have discussed so far are based on the principle of maximum likelihood estimation. While being extremely general, there are limitations of this approach as illustrated in the two examples below.

Let’s suppose we are interested in modeling the outcome of a biased coin, \(X \in \{heads, tails\}\). We toss the coin 10 times, observing 6 heads. If \(\theta\) denotes the probability of observing heads, the maximum likelihood estimate (MLE) is given by,

Now, suppose we continue tossing the coin such that after 100 total trials (including the 10 initial trials), we observe 60 heads. Again, we can compute the MLE as,

In both the above situations, the maximum likelihood estimate does not change as we observe more data. This seems counterintuitive - our confidence in predicting heads with probability 0.6 should be higher in the second setting where we have seen many more trials of the coin! The key problem is that we represent our belief about the probability of heads \(\theta\) as a single number \(\theta_{MLE}\), so there is no way to represent whether we are more or less sure about \(\theta\).

For simplicity, assume that our language corpus consists of a single sentence, “Probabilistic graphical models are fun. They are also powerful.” We can estimate the probability of each of the individual words based on the counts. Our corpus contains 10 words with each word appearing once, and hence, each word in the corpus is assigned a probability of 0.1. Now, while testing the generalization of our model to the English language, we observe another sentence, “Probabilistic graphical models are hard.” The probability of the sentence under our model is \(0.1 \times 0.1 \times 0.1 \times 0.1 \times 0 = 0\). We did not observe one of the words (“hard”) during training which made our language model infer the sentence as impossible, even though it is a perfectly plausible sentence.

A prior distribution over the parameters, \(p(\theta)\) encodes our initial beliefs. These beliefs are subjective. For example, we can choose the prior over \(\theta\) for a biased coin to be uniform between 0 and 1. If however we expect the coin to be fair, the prior distribution can be peaked around \(\theta = 0.5\). We will discuss commonly used priors later in this chapter.

Hence, Bayesian learning provides a principled mechanism for incorporating prior knowledge into our model. Bayesian learning is useful in many situations such as when want to provide uncertainty estimates about the model parameters (Example 1) or when the data available for learning a model is limited (Example 2).

When calculating posterior distribution using Bayes’ rule, as in the above, it should be pretty straightforward to calculate the numerator. But to calculate the denominator \(p(\mathcal{D})\), we are required to compute an integral

This might cause us trouble, since integration is usually difficult. For this very simple example, we might be able to compute this integral, but as you may have seen many times in this class, if \(\theta\) is high dimensional then computing integrals could be quite challenging.

To tackle this issue, people have observed that for some choices of prior \(p(\theta)\), the posterior distribution \(p(\theta \mid \mathcal{D})\) can be directly computed in closed form. Going back to our coin toss example, where we are given a sequence of \(N\) coin tosses, \(\mathcal{D} = \{X_{1},\ldots,X_{N}\}\) and we want to infer the probability of getting heads \(\theta\) using Bayes rule. Suppose we choose the prior \(p(\theta)\) as the Beta distribution defined by

where \(\alpha_H\) and \(\alpha_T\) are the two parameters that determine the shape of the distribution (similar to how the mean and variance determine a Gaussian distribution), and \(B(\alpha_H, \alpha_T)\) is some normalization constant that ensures \(\int p(\theta)d\theta=1\). We will go into more details about the Beta distribution later. What matters here is that the Beta distribution has a very special property: the posterior \(p(\theta \mid \mathcal{D})\) is always another Beta distribution (but with different parameters). More concretely, out of \(N\) coin tosses, if the number of heads and the number of tails are \(N_H\) and \(N_T\) respectively, then it can be shown that the posterior is: 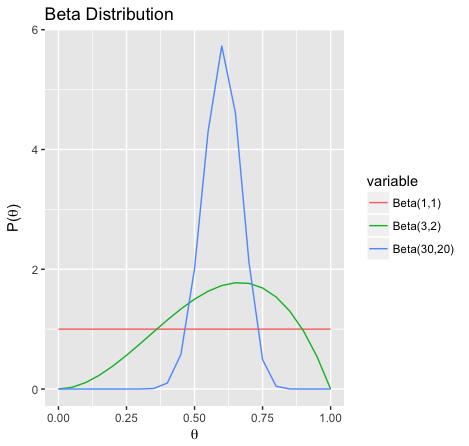 We give another example of a conjugate prior which generalizes the Bernoulli example above. Instead of being limited to binary outcomes, we can now consider the categorical distribution (think of a \(K\)-sided dice). Let \(\mathcal{D} = \{ X_1, \ldots, X_N \}\) be \(N\) rolls of the dice, where \(X_j \in \{ 1, \ldots, K \}\) is the outcome of the \(j\)-th roll. The parameter of the categorical distribution is denoted by \(\theta\)

where \(B(\alpha)\) is still a normalization constant.

Conjugate priors is a powerful tool used in many real world applications such as topic modeling (e.g. latent dirichlet allocation) and medical diagnosis. However, practitioners should be mindful of its short-comings and consider and compare with other tools such as MCMC or variational inference (also covered in these lecture notes).