Up to now, we have assumed that when learning a directed or an undirected model, we are given examples of every single variable that we are trying to model.

However, that may not always be the case. Consider for example a probabilistic language model of news articlesA language model \(p\) assigns probabilities to sequences of words \(x_1,...,x_n\). We can, among other things, sample from \(p\) to generate various kinds of sentences.. Each article \(x\) typically focuses on a specific topic \(t\), e.g., finance, sports, politics. Using this prior knowledge, we may build a more accurate model \(p(x \mid t)p(t)\), in which we have introduced an additional, unobserved variable \(t\). This model can be more accurate, because we can now learn a separate \(p(x \mid t)\) for each topic, rather than trying to model everything with one \(p(x)\).

However, since \(t\) is unobserved, we cannot directly use the learning methods that we have so far. In fact, the unobserved variables make learning much more difficult; in this chapter, we will look at how to use and how to learn models that involve latent variables.

where the \(x\) variables are observed at learning time in a dataset \(D\) and the \(z\) are never observed.

The model may be either directed or undirected. There exist both discriminative and generative LVMs, although here we will focus on the latter (the key ideas hold for discriminative models as well).

Gaussian mixture models (GMMs) are a latent variable model that is also one of the most widely used models in machine learning. 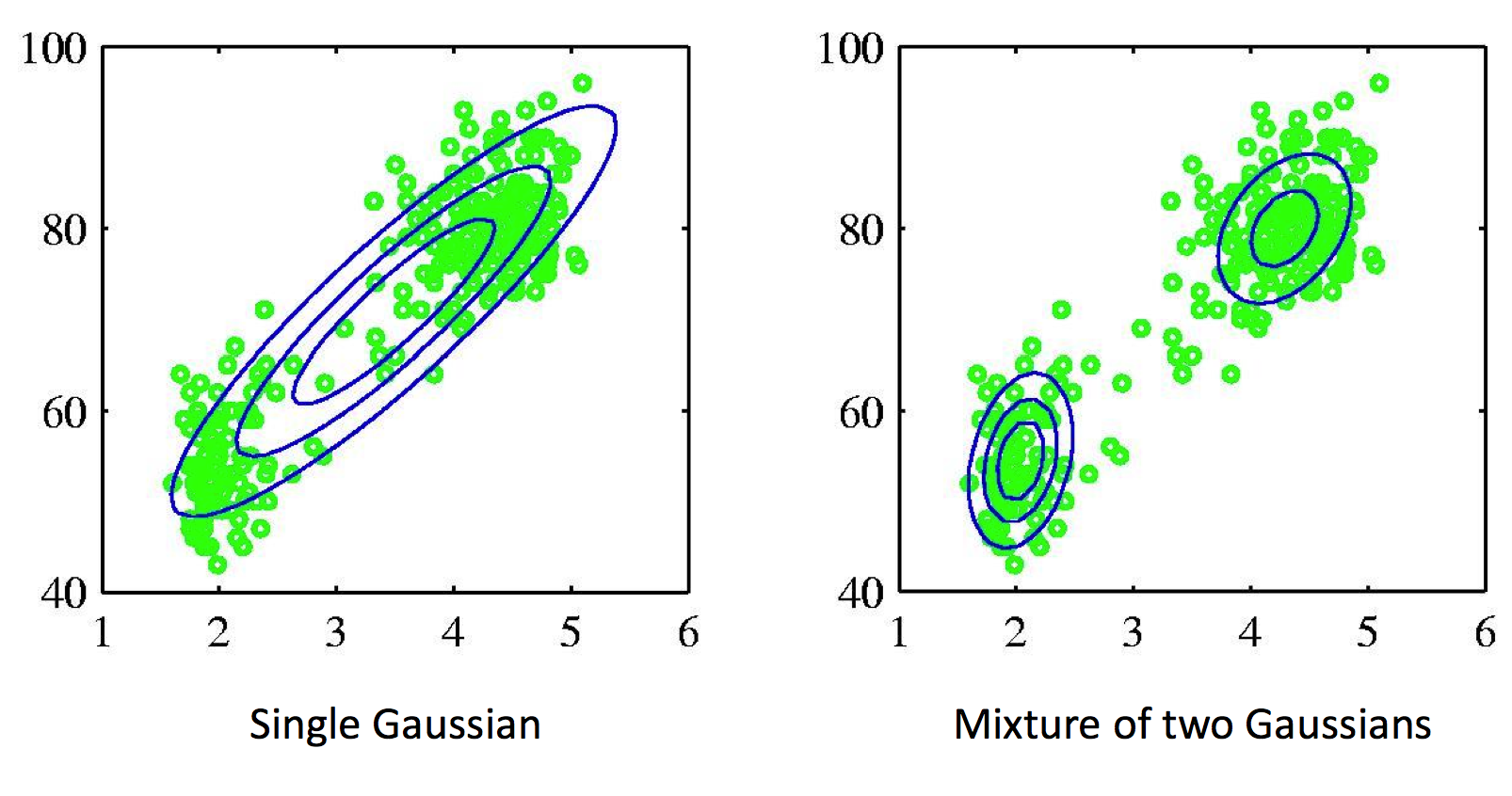 Example of a dataset that is best fit with a mixture of two Gaussians. Mixture models allow us to model clusters in the dataset.

is a multivariate Gaussian with mean and variance \(\mu_k, \Sigma_k\).

This model postulates that our observed data is comprised of \(K\) clusters with proportions specified by \(\pi_1, \dotsc, \pi_K\); the distribution within each cluster is a Gaussian. We can see that \(p(x)\) is a mixture by explicitly writing out this probability:

Why are latent variable models useful?

There are two reasons why we might want to use latent variable models.

The simplest reason is that some data might be naturally unobserved. For example, if we are modeling a clinical trial, then some patients may drop out, and we won’t have their measurements. The methods in this chapter can be used to learn with this kind of missing data.

However, the most important reason for studying LVMs is that they enable us to leverage our prior knowledge when defining a model. Our topic modeling example from the introduction illustrates this. We know that our set of news articles is actually a mixture of \(K\) distinct distributions (one for each topic); LVMs allow us to design a model that captures this.

LVMs can also be viewed as increasing the expressive power of our model. In the case of GMMs, the distribution that we can model using a mixture of Gaussian components is much more expressive than what we could have modeled using a single component.

How do we train an LVM? Our goal is still to fit the marginal distribution \(p(x)\) over the visible variables \(x\) to that observed in our dataset \(D\). Hence our previous discussion about KL divergences applies here as well and by the same argument, we should be maximizing the marginal log-likelihood of the data

This optimization objective is considerably more difficult than regular log-likelihood, even for directed graphical models. For one, we can see that the summation inside the log makes it impossible to decompose \(p(x)\) into a sum of log-factors. Hence, even if the model is directed, we can no longer derive a simple closed form expression for the parameters. 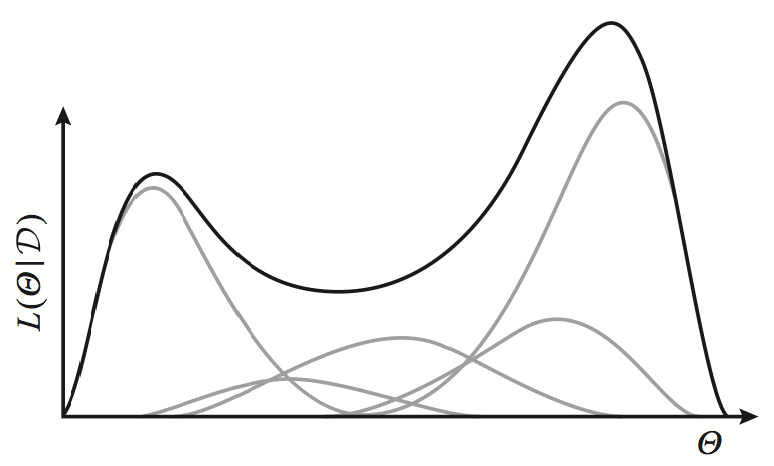 Exponential family distributions (gray lines) have concave log-likelihoods. However, a weighted mixture of such distributions is no longer concave (black line). Looking closer at the distribution of a data point \(x\), we also see that it is actually a mixture

of distributions \(p(x \mid z)\) with weights \(p(z)\). Whereas a single exponential family distribution \(p(x)\) has a concave log-likelihood (as we have seen in our discussion of undirected models), the log of a weighted mixture of such distributions is no longer concave or convex.

This non-convexity requires the development of specialized learning algorithms.

Since the objective is non-convex, we will resort to approximate learning algorithms. These methods are widely used in practice and are quite effectiveNote however, that (quite surprisingly), many latent variable models (like GMMs) admit algorithms that can compute the global optimum of the maximum likelihood objective, even though it is not convex. Such methods are covered at the end of CS229T..

EM follows a simple iterative two-step strategy: given an estimate \(\theta_t\) of the parameters, compute \(p(z\mid x)\) and use it to “hallucinate” values for \(z\). Then, find a new \(\theta_{t+1}\) by optimizing the resulting tractable objective. This process will eventually converge.

We haven’t exactly defined what we mean by “hallucinating” the data. The full definition is a bit technical, but its instantiation is very intuitive in most models like GMMs.

By “hallucinating” the data, we mean computing the expected log-likelihood

Since the summation is now outside the log, we can maximize the expected log-likelihood. In particular, when \(p\) is a directed model, \(\log p\) again decomposes into a sum of log-CPD terms that can be optimized independently, as discussed in the chapter on directed graphical models.

We can formally define the EM algorithm as follows. Let \(D\) be our dataset.

Let’s look at this algorithm in the context of GMMs. Suppose we have a dataset \(D\). In the E-step, we may compute the posterior for each data point \(x\) as follows:

Recall that in the original model, \(z\) is an indicator variable that chooses a component for \(x\); we may view this as a “hard” assignment of \(x\) to one component. The result of the \(E\) step is a \(K\)-dimensional vector (whose components sum to one) that specifies a “soft” assignment to components. In that sense, we have “hallucinated” a “soft” instantiation of \(z\); this is what we meant earlier by an “intuitive interpretation” for \(p(z\mid x; \theta_t)\).

At the M-step, we optimize the expected log-likelihood of our model.

Note how these are the just the mean and variance of the data, weighted by their cluster affinities! Similarly, we may find out that the class priors are

Although we have derived these results using general facts about exponential families, it’s equally possible to derive them using standard calculus techniques.

Why exactly does EM converge? We can understand the behavior of EM by casting it in the framework of variational inference.

Consider the posterior inference problem for \(p(z\mid x)\), where the \(x\) variables are held fixed as evidence. We may apply our variational inference framework by taking \(p(x,z)\) to be the unnormalized distribution; in that case, \(p(x)\) will be the normalization constant.

over distributions \(q\). The ELBO satisfies the equation

The EM algorithm can be seen as iteratively optimizing the ELBO over \(q\) (at the E step) and over \(\theta\) (at the M) step.

Next, we optimize the ELBO over \(p\), holding \(q\) fixed. We solve the problem

Note that this is precisely the optimization problem solved at the \(M\) step of EM (in the above equation, there is an additive constant independent of \(\theta\)).

From our above discussion, it follows that EM has the following properties:

However, since we optimizing a non-convex objective, we have no guarantee to find the global optimum. In fact, EM in practice converges almost always to a local optimum, and moreover, that optimum heavily depends on the choice of initialization. Different initial \(\theta_0\) can lead to very different solutions, and so it is very common to use multiple restarts of the algorithm and choose the best one in the end. In fact EM is so sensitive to the choice of initial parameters, that techniques for choosing these parameters are still an active area of research.

In summary, the EM algorithm is a very popular technique for optimizing latent variable models that is also often very effective. Its main downside are its difficulties with local minima.